Numbers in French: The Ultimate Guide

Numbers in French: Any non-native French person learning the language will agree that one of the trickiest things to get to grips with is the number system. It might be smooth sailing until you get to sixty-nine, but then funny things start to happen because they don’t have a separate word for seventy, or eighty, or even ninety for that matter. Even the most proficient French speaker will relate to that all-too-familiar moment where you freeze as you jot down a phone number or have to scribble out few digits because what you thought was sixty-something turned out to be 72.

With French, it isn’t just about being good at the language, in order to get to grips with these higher numbers, it seems you need to be good at mental maths too. Take 77 for example, or rather, ‘sixty-ten-seven’ as it would be said in French. And it gets worse. Ninety-nine translates to “four-twenty-ten-nine” or quatre-vingt-dix-neuf.

Numbers are undeniably important when it comes to interacting with other people, from telling someone how old you are to find out how much something in a store costs, to maybe even exchanging numbers with that cute Frenchie you’ve been chatting with. French numbers aren’t quite as straightforward as numbers in English; at a certain level, they actually require you to do a little math.

But like any other kind of vocabulary, once you’ve memorized and practiced them, they will get easier.

Before we begin, the good news is, this set of numbers is just like those in many other languages: simply a word for each that you have to memorize. 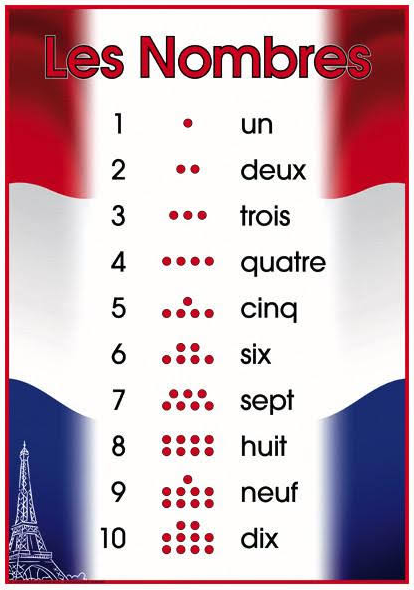 Try getting to know these French numbers by repeating them a few times every day until you’ve got them down.

If you’re one of those people who finds your Zen by counting to ten, why not try doing it in French next time?

Now let’s take things to the next level: the teens.

The good news is, there is a French equivalent to the suffix “-teen” in English: the prefix dix-.

The only downside is that whereas “-teen” is used in English starting with the number 13, in French you’ll have to wait till 17.

In the teens, you’ll see the first examples of one of the essential rules of writing French numbers in letters: If there are multiple words in a number, they’re connected by hyphens. 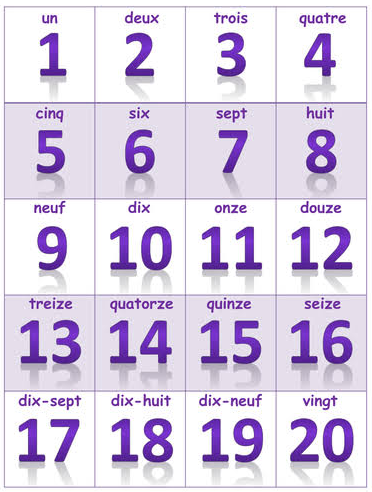 As in English, when you get past 20 in French, you simply have to add the additional number after it. So, for example, 24 is vingt-quatre.

The only exception is with the ones. When you add “un” to a number ending in zero, you also have to include the word “and” (et). Can you guess how to say 21 in French? That’s right: vingt-et-un.

Let’s look at how to write some of the numbers from 21-69 in French: 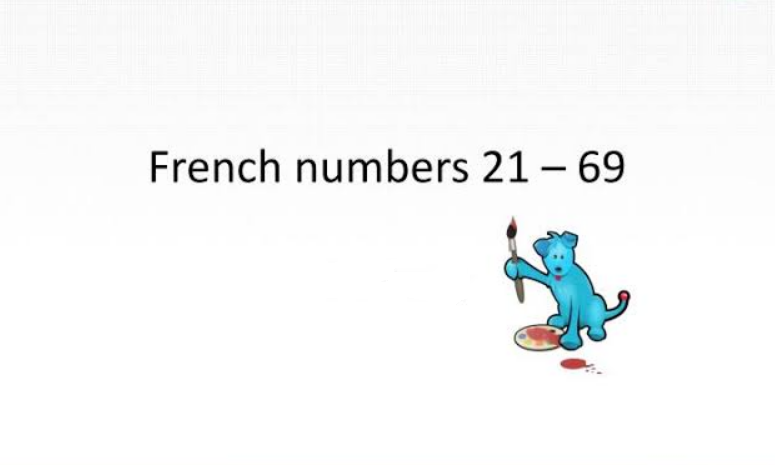 Pop quiz: How do you say “54” in French? Take a guess, then check it with whatever method you prefer. Did you get it right?

This is where that math I was talking about comes in. Instead of 70 being some form of sept in French, it’s soixante-dix. If you’re starting to get the hang of the numbers already, you’ll recognize that 70 in French basically translates to “60 and 10”.

If you’re a fellow math hater like me, maybe count to ten – or, preferably, dix, to calm and energize yourself. Good? Good. Now, let’s move on to the numbers 80-89 in French.

Here, multiplication is the name of the game.

Instead of 80 being some form of huit, or even something like “soixante-vingt”, it’s quatre-vingts. Yep, that’s “four twenties” – in other words, 4×20.

Note that the “s” at the end of “vingt” drops off after 80. This makes sense when you think about it, but I can’t shake the feeling that it’s just another way to make things harder.

Also notice that, exceptionally, the “et” is gone in 81 (quatre-vingt-un). There’s no logic I can think of there.

close up of man counting money and making notes

The numbers 90-99 in French are going to kick it up a notch. Instead of coming up with another name for “90”, we’ll just take quatre-vingt and add ten to it! And then, of course, follow the same rule we saw with soixante-dix, keeping the ones as teens.

Here’s how that works:

After 99, the French numbers get easier.

The word for “hundred” is cent. Just like in English, when you count by hundreds, you simply add the number of hundreds before the word. 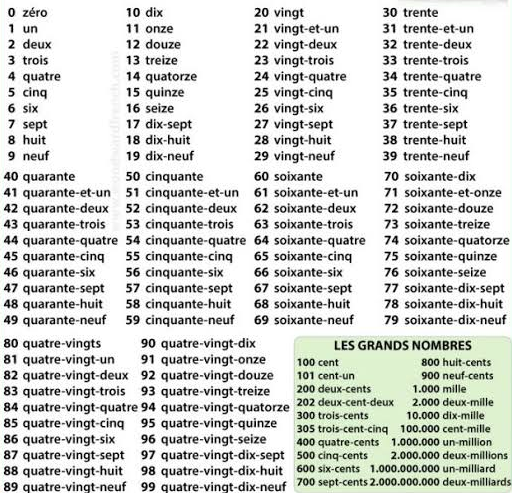 When you want to add a one or ten, it’s also pretty straightforward. Just add the number after “cent”. You don’t even have to add “et” with one. And, you no longer have to agree on cent with the number of hundreds before it. Here are some examples:

When you reach 1000, things are even easier because the French decided to throw out the idea of pluralizing mille when there are multiple thousands.

How lucky you are to be in France during the famous cycling race, le Tour de France! You and your friend Claire are watching the cyclists finish the sixth stage of the race la sixième (pronounced: see-zee-em) étape.

Other Forms of Ordinal Numbers

There are a few exceptions, though!

The equivalent of ‘first’ in French is premier for the masculine form and première for the feminine form. It needs to agree with the gender of the noun it is modifying. In other words, if it is modifying a feminine word such as in ‘the first time,’ the expression would be la première fois (pronounced: pruh-mee-air) since fois is feminine.

Why are French numbers so weird?

Then comes the “vigesimal system” which used the base 20, hence quatre-vingt-quatre (84). This is supposed as they used their feet as well as their hands to count. Many believe it ended up in French due to the influence of the Celts in France, whose languages use the base 20 system.

What is number 14 in French?

Why do the French not have a word for 70?

Actually, the French system was designed regularly, i.e. with “septante” for 70, “octante” for 80 and “nonante” for 90. But this system was not accepted at the time (roughly the 16th century), because people were used to the old system (“quatre-vingt”, etc.).

How do you write French numbers in words?

Do French use AM and PM?

In France, you will often hear the twenty-four-hour clock used, as such: Il est vingt heures. ​The fact is that, when there’s no risk of confusion between AM and PM, French people use both 12-hour and 24-hour clocks interchangeably: Il est trois heures et demie de l’après-midi.
← Previous Post
Next Post →