Remainder Theorem: Definition, Examples & More: Everyone loves to find a shortcut whether it involves driving directions or some other type of long task. Discovering a quicker and more efficient way to arrive at the same endpoint makes you feel good since you’ve most likely saved time, effort, and/or money. Math is filled with these types of shortcuts and one of the more useful ones is the remainder theorem.

The remainder theorem states that when a polynomial, f(x), is divided by a linear polynomial, (x -a) the remainder of that division will be equivalent to f(a). In other words, if you want to evaluate the function f(x) for a given number, a, you can divide that function by x – a and your remainder will be equal to f(a). 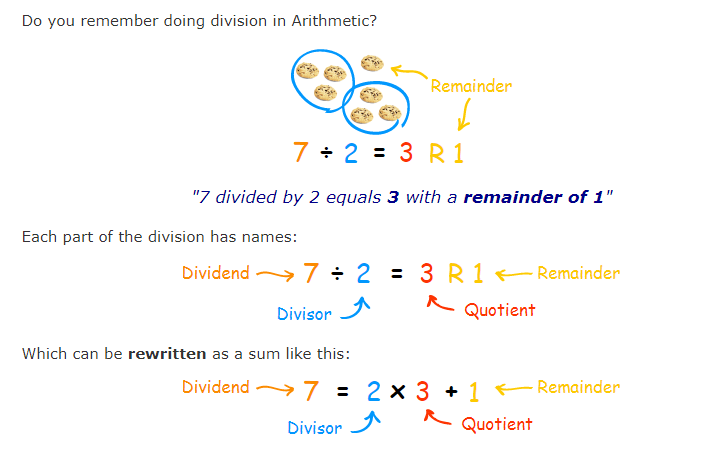 Additionally, synthetic division and the remainder theorem can be used to determine if a value is a zero of a function. Hopefully, you remember that a zero of a function, by definition, is any point c, where f(c) = 0. Therefore, if you find a remainder of zero after performing synthetic division, the number listed out front, referred to as a in the definition above, evaluates to zero, or f(a) = 0.

How to Use the Theorem

In number theory, the Chinese remainder theorem states that if one knows the remainders of the Euclidean division of an integer n by several integers, then one can determine uniquely the remainder of the division of n by the product of these integers, under the condition that the divisors are pairwise coprime. The earliest known statement of the theorem is by the Chinese mathematician Sunzi in Sunzi Suanjing in the 3rd century AD.

The Chinese remainder theorem is widely used for computing with large integers, as it allows replacing a computation for which one knows a bound on the size of the result by several similar computations on small integers. The Chinese remainder theorem (expressed in terms of congruences) is true over every principal ideal domain. It has been generalized to any commutative ring, with a formulation involving ideals.

Let n1, …, nk be integers greater than 1, which are often called moduli or divisors. Let us denote by N the product of the ni.

The Chinese remainder theorem asserts that if the ni are pairwise coprime, and if a1, …, ak are integers such that 0 ≤ ai < ni for every i, then there is one and only one integer x, such that 0 ≤ x < N and the remainder of the Euclidean division of x by ni is ai for every i.

This may be restated as follows in term of congruences: If the ni are pairwise coprime, and if a1, …, ak are any integers, then there exists an integer x such that

and any two such x is congruent modulo N.

In abstract algebra, the theorem is often restated as: if the ni are pairwise coprime, the map

one may do the same computation independently in each

and then get the result by applying the isomorphism (from the right to the left). This may be much faster than the direct computation if N and the number of operations are large. This is widely used, under the name multi-modular computation, for linear algebra over the integers or the rational numbers.

The theorem can also be restated in the language of combinatorics as the fact that the infinite arithmetic progressions of integers form a Helly family.

For a system of congruences with co-prime moduli, the process is as follows

Looking up 1/3 in the division table modulo 5, this reduces to a simpler equation

which, in turn, is equivalent to t=5s+2 for an integer s.

How do you use Remainder Theorem?

In other words, if you want to evaluate the function f(x) for a given number, a, you can divide that function by x – a and your remainder will be equal to f(a). It should be noted that the remainder theorem only works when a function is divided by a linear polynomial, which is of the form x + number or x – number.

What is Remainder Theorem Class 9?

Remainder Theorem of Polynomials – Polynomials, Class 9, Mathematics. REMAINDER THEOREM. If p(x) is any polynomial of degree greater than or equal to 1 and let a be any real number. When p(x) is divided by x– a, then the remainder is equal to p(a).

What is the factor theorem with example?

What is the formula for the remainder?

What does the root of a function mean?