Ser Conjugation – Spanish Verb Ser – In English, we know the forms of the verb “to be” without thinking. I am. You are. We are. They are. In Spanish, each verb changes to reflect the subject of the verb, as well as the tense (such as the present, past, or future). These changes are called conjugations.

Ser and estar can both be translated as “to be.” Here is the English verb, fully conjugated:

Notice that these two sentences can have different meanings in English.

In the second case, our example speaks of the essential characteristics of the apple. The apple is green in color. This particular apple remains green even after it has ripened.

How is the apple?
It is unripe.

What color is the apple?
It is green.

In Spanish, a different verb is used to express “to be” depending on whether the speaker intends to address a condition or an essential quality.

Note how the adjective “verde” actually changes meaning, depending upon whether it is used with ser or estar.

To address condition, use estar. Estar is an irregular verb. It does not follow the standard rules of conjugation for regular -ar verbs. Therefore, you must memorize it. 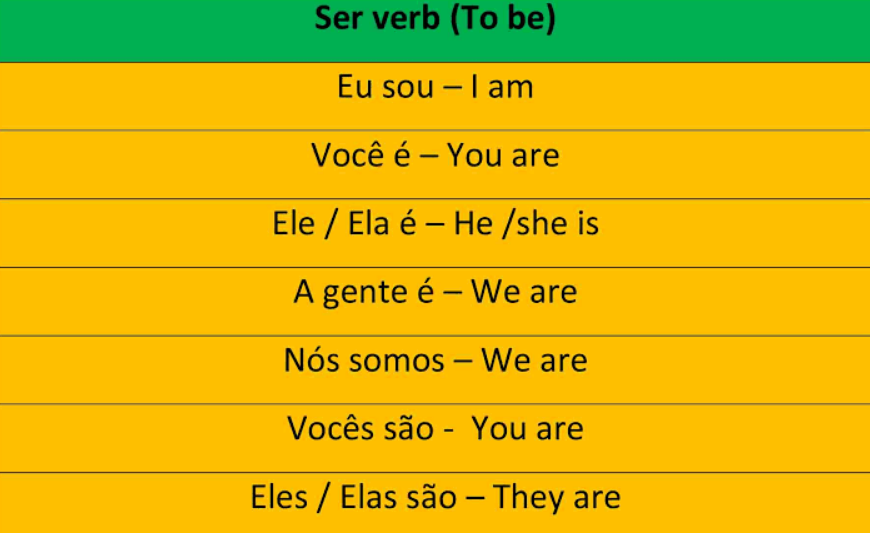 To address an essential quality, use ser. Ser is also irregular and must be memorized.

What is she like?
She is quiet.
Use ser:
Ella es callada.

How is she acting?
She is being quiet.
Use estar:
Ella está callada.

As you know, there are two different verbs that both mean ‘to be’ in Spanish: ser and estar. In this lesson, you’ll be learning how to conjugate both of these verbs in the preterite tense. You’ll also be briefly reviewing when to use ser and when to use estar.

yo fui nosotros/as fuimos
tú fuiste vosotros/as fuisteis
él/ella/Ud. fue ellos/ellas/Uds. fueron
Both these verbs use the stem ‘fu-.’ The endings are almost like regular ‘-er’/’-ir’ preterite endings, except that the first person singular ending (-i) has no accent, the third person singular ending is ‘-e’ instead of ‘-ió,’ and the third person plural ending is ‘-eron’ rather than ‘-ieron.’ Since the yo form of ‘-ar’ verbs is ‘-é’ in the preterite, both fui and fue look like they could be the yo form, so students sometimes mistakenly say yo fue. So, be sure to remember, fui is the yo form and fue is the él/ella/Ud. form.

Ir or Ser?
Since ir and ser are identical in the preterite tense, you have to rely on context to tell which verb is being used. Usually, it is pretty easy to tell the difference between the two verbs. For one thing, ir is usually followed by the preposition a (to), since you usually go ‘to’ somewhere. However, if ir is reflexive (irse), it means to go away and can be used without the preposition a.

Let’s take a look at some sentences that use the preterite tense of ir or ser. Based on the context, decide which verb is being used:

Yo fui a la universidad el lunes por la mañana.
La película fue muy chistosa.
Ayer fue mi cumpleaños.
Mis amigos y yo fuimos al cine.
Mis padres se fueron por la tarde.
The Preterite Tense of Estar
Estar is another verb that is irregular in both the present and the preterite tense. But since it doesn’t look like any other irregular verbs that you already know, you will have to memorize it.

One way to think of the differences between ser and estar is to think of ser as the “passive” verb and estar as the “active” one. (The terms aren’t being used in a grammatical sense here.) Ser tells you what something is, the nature of its being, while estar refers more to what something does. You might use soy (the first-person present of ser, meaning “I am”) to explain who or what you are, but you’d use estoy (the first-person present of estar) to tell what you are being or doing.

For example, you might say, “Estoy enfermo” for “I am sick.” That would indicate that you are sick at the moment. But it doesn’t tell anyone what you are. Now if you were to say, “Soy enfermo,” that would have a different meaning entirely. That would refer to who you are, to the nature of your being. We might translate that as “I am a sick person” or “I am sickly.”

Note similar differences in these examples:

Estoy cansado. (I am tired.) Soy cansado. (I am a tired person. My nature is to be tired)
Estoy feliz. (I’m happy now.) Soy feliz. (I am happy by nature. I am a happy person.)
Está callada. (She’s being quiet.) Es callada. (She’s introverted. She’s naturally a quiet person.)
No estoy lista. (I’m not ready.) No soy lista. (I’m not a quick thinker.)

Another Approach to Ser vs. Estar
Another way of thinking about the two verbs is to think of ser as being roughly equivalent to “equals.” Another approach is that estar often refers to a temporary condition, while ser frequently refers to a permanent condition. But there are exceptions.

Among the major exceptions to the above way of thinking is that ser is used in expressions of time, such as “Son las dos de la tarde” for “It’s 2 p.m.” Also, we use estar to indicate someone has died—quite a permanent condition: Está muerto, he is dead.

Along that line, estar is used to indicate location. Estoy en casa. (I am at home.) But, soy de México. (I am from Mexico.) Ser, however, is used for the location of events: La boda es en Nuevo Hampshire. (The wedding is in New Hampshire.)

Note that sometimes estar is often modified by an adverb such as bien rather than an adjective: Estoy bien. (I’m fine.)

Although rare, there are a few situations where you can use either ser or estar. A married man describing his marital status could say either “Soy casado” or “Estoy casado.” He might be more likely to use soy because he considers being married as part of his identity, although he might use estoy to indicate that he had been married recently.

Present Conjugation of Ser and Estar
Both ser and estar are irregularly conjugated. Here’s a chart of the indicative present tense:

The Essential Guide To Spanish Connectors With Examples

Why Is German So Hard To Learn For English And Spanish Speakers?

Most Popular 250+ French Phrases, Words And, Sayings In English About Love, Life And Travel