The Tools Every Language Student Should Be Using Outside Of Class 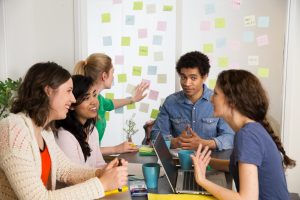 Imagine being bilingual and what that could do for your future.

Career options? Through the roof. Living abroad? You’re on the locals’ frequency before you’ve even got there.

C’mon. we’d all enjoy having another language under the belt, surely?

The sad thing is, for us lazy folk, this takes some real effort and time. If we all learned new skills like Neo learned Kung-Fu in the Matrix, people across the world would be a lot better connected – and there’d be a lot more ass-kicking, that’s for sure.

Becoming fluent in a new language isn’t something that happens overnight. And besides the time and determination it takes, a little passion goes a long way, too. Think about it. Maybe you’ve just met your soulmate on a trip around Europe, or you’ve wanted to live in France for as long as you can remember.

If you’re anything like the writer of this post, perhaps you’re getting a little fed up with your girlfriend’s Abuela accosting you on every (expensive) visit due to the lack of Spanish on your tongue. She’ll get her comeuppance one day, honest (and in Spanish, too).

Everyone’s reasons for embracing a new language are different. And some people are passionate enough to take their learning all the way from middle school to graduation. But unless you’re blessed with being taught by your parents since you were a little sprout, formal education is no doubt the best way to working on becoming fluent.

Students shouldn’t rely solely on their typical studies, though. Arriving half asleep only to forget what was taught in that Monday afternoon lecture is all too common.

A number of tools exist to teach you new stuff from home as well as solidify what you already know, even if you’re blessed with having the easiest language to learn (such a subjective statement, eh?)

Keep reading to find out what the best tools are and the ways they can support your journey.

See, you won’t find dodgy, outsourced, and poor subtitles here: they’re all produced in-house, and they’re designed to help you speak just like the locals. And that’s for every language it caters to. An understanding of the local culture and vocabulary is hugely important to quality subtitles, and that’s what you’ll find here.

Lingopie isn’t all about quality subs, though. Far from it. Users can pause and make direct translations on any transcriptions, and these can be saved for later as flashcards. It’s learning made fun, so why not make a game of it? Plus, the range of foreign TV shows and movies it hosts is not just high-quality and original – it’s always growing.

Lingopie is the perfect companion for your modern-day language student.

We’re not talking about the real Rosetta Stone here, the Ancient Egyptian text that’s etched on a piece of granitic rock and lives (currently) in the British Museum. You probably already knew that, though, didn’t you? The one we’re referring to, the language-learning tool, is still old… but not that old. It was founded in 1992.

The software has grown plenty over the years, and is a great choice for learners of all competencies that are keen to read, write, speak, and practise their chosen language. You can’t learn by streaming original shows and movies through it, but where memberships used to cover just one mother tongue, they now include all 25 the service offers.

It’s no doubt better for those at the beginner-to-intermediate stage, but it’s useful for all abilities. And it’s trusted around the world. Signing up will see you joining millions of active subscribers.

Anyone who’s so much as floated the idea of learning a new language or knows someone that has will have heard of Duolingo. No doubt every language student is aware of it.

The app is incredibly popular and this is largely for two reasons: it’s easy to treat your time on it like you’re playing a game, and it’s mobile-focused. That means you can squeeze in a lesson or two while you’re on the train, stuck waiting for a meeting to start at work, or you’re passing time on the toilet.

The app used to give a lot more to free users; now, unless you pay, it works on more of a survival-style basis. Run out of lives (hearts) and you’ll need to wait until tomorrow for your next five to start playing again. This, of course, makes it more game-like, and you can earn the odd heart through other means, like watching ads. But don’t expect the perfect companion here: the sentences you have to memorize are often baffling, and culturally, don’t really offer much connection to reality.

How To Say Hello, Goodbye And Thank You In Ukrainian?

How To Learn And Use German Articles – A Complete Guide

How To Learn Spanish Fast For Free? – Beginners Ultimate Guide